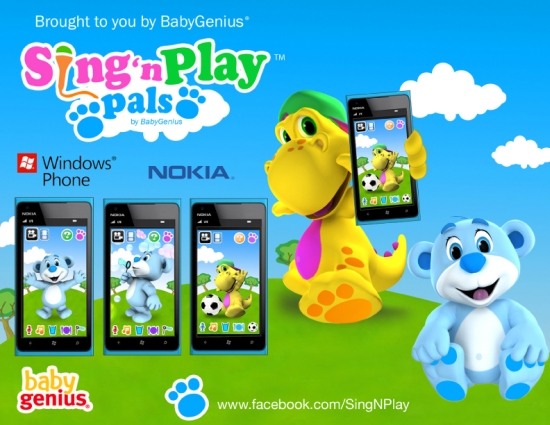 The Baby Genius applications are intended to help children transition from preschool to kindergarten school levels. Two applications will initially release this summer on Nokia’s Windows Phones, both from the Sing ‘n Play Pals series. Applications contain free and premium content, which can only be unlocked through the control of a parent.

“We are extremely excited to work with Nokia as their content partner for its Windows Phone platforms and look forward to a long and successful relationship between our companies as we produce a series of Baby Genius content for Windows Phone. We believe this content is well suited for other Windows platforms so that children and families can enjoy Baby Genius educational content on multiple devices” – CEO of Genius Brands Klaus Moeller

“The Lumia 610, 710, 800, and hero device Lumia 900 on AT&T are helping to drive the success of the Microsoft Windows Phone ecosystem by attracting valued and engaging content from trusted publishers. Parents want to be confident being their young children’s first teacher and Baby Genius content delivers on that promise.” – Chris Surowiec from Nokia

Once again, Nokia is showing their dedication through action to the Windows Phone platform. More partnerships and more appeal, not just to gamers and smartphone users, but even for parents with children.