Update: We have since received clarification on the Lumia 910 12MP rumors from Damian Dinning himself. Our posting below has since been updated.

Folks, this is why you can’t always give into the Internet rumors so easily.

Most of the time, rumors are what people would hope and wish would come to a product, but it’s even worse when the rumors are squashed by the companies themselves. In this regard, if you heard the rumors recently about a Nokia Lumia 910 being available soon for Europe, without LTE but packing a 12MP camera, Nokia has stated the device simply doesn’t exist (with a 12MP camera that is). To clarify, the rumored Lumia 910 would have been the European version of the Lumia 900, without LTE and with the supposed 12MP camera. Although it is probably a wish of many European Windows Phone users, Nokia’s own camera guru Damian Dinning cleared up the rumor with three simple words via Twitter. 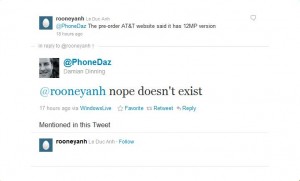 AT&T, along with some Dutch websites, were even listing the Lumia 900 device as packing a 12MP camera, but no such device exists. Damian Dinning responded to the inquiry via Twitter without any other words, no confirmations of anything else. The camera the Lumia 900 does have is the same found on the Nokia N9 and Nokia Lumia 800 devices (8.7MP). Many of us in the Windows Phone space already knew such information about the Lumia 900, and we can assume it will ship with the same camera come European release.

Dinning clarified to us that he never comments on rumors or speculations either, so the possibility of a Lumia 910 is something of the imagination, for now. The Lumia 910 could very well have a 12MP camera if it ever releases, but it surely will not be releasing so soon to Europe as their version of the Lumia 900.

Nokia does have some devices that tout a 12MP camera and we hope a magnificent camera like that is soon available on future Windows Phone devices.