The Dark Knight Rises application includes features such as a visually stunning Metro UI interface, a Foursquare-based game, bonus content such as ringtones, local movie times and locations, and bonus movie information. Nokia has a visual walkthrough of the application, and if you have a Nokia Lumia Windows Phone you can download the application from the marketplace right now. 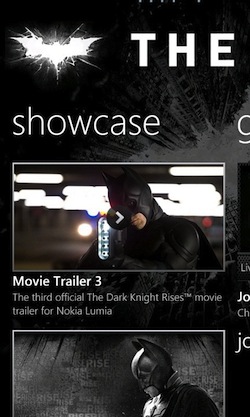 Immerse your self in the app

I asked Justin Oppelaar, a member of the team who produced the app, about the theming and color choices in the app, ”From a design perspective we wanted to capture the style of mystery and foreboding from the film – hence the black/white graphics, the “broken bat shield” iconography and the general dark tone of the design.”

However, one swipe over and you’re instantly taken to the Gotham City game, which is a Foursquare-based contest in which you can check into locations in your surrounding area to defend them against the enemy.

When registering for the game, you identify as either Batman or Bane.

With each check-in, you earn points and help defend that location against Bane (in my case, I chose Batman as my role).

There’s also a leaderboard to see how your check-in activity stacks up against other Dark Knight Rises players worldwide.

Check in and earn rewards

Checking-in and defending against your mortal enemy is fun, but what’s in it personally? The app developers have thought of this too – after you build up a few check-ins and points, you’re given rewards.

In my case, one of my first rewards was a Batpod ringtone. As more people get their hands on the app, it will be fun to see what rewards you earn. With the points you earn, you can defend your locations and even attack opponents locations, individually or in teams.

Oppelaar said the game was fun to produce because it creates some fun inside the app with a game that was independent of the movie content.

Be sure to check out the game inside the app. I find it really interesting that it’s Foursquare based, to bring some real-world gaming action with a fun incentives to keep me wanting to check-in as I go about my town.

Find a theater location near you

Based on your location, you can see a map and list view of the theaters in your area featuring the film.

As an added bonus, there is an attractive Bat-centered artwork that moves with you based on your current geography.

Curious to know more about the Dark Knight Rises film synoposis, full cast list and links to other mobile film sites? It’s all in the “Info” section. The cast list even features photos so you can easily identify the stars in the movie for research. There are links to Wikipedia, Flixter and IMDB so you can pull up even more information about the film.

Lastly, the Fan Buzz section shows live tweets about the movie based on hashtags and concentrated search, so you can see what folks are saying about the film in real-time.

With the Dark Knight Rises app, Nokia has taken the stereotypical film mobile app and injected innovative location-based gaming and fun rewards that make the app a fun experience as we wait for the film to be release officially on July 20, 2012.