With all the flack the Nokia Lumia 610 Windows Phone has been getting lately due to its low 256 MB of RAM, Nokia is pulling through with nine reasons to own the still-great Lumia 610. To begin with, we want to clarify that the Nokia Lumia 610 in itself is a low-tier Windows Phone, it always has been. The Lumia 710, Lumia 800, and Lumia 900 do exist as alternate options if you feel the 256 MB of RAM, to begin with, on the Lumia 610 will hinder your Windows Phone experience. The Lumia 610 is a budget Windows Phone more directly suitable for new smartphone users, or users who very much do not need the same features offered on the amazing Lumia 900 for example.

Now, lets get to the nine reasons to own a Lumia 610 Windows Phone on behalf of Nokia. You will find there are actually ten reasons below, that number ten is Nokia’s side of the story about the limited RAM on the Lumia 610.

1.     Fast access to all your information. The signature Live Tiles mean you can see all your notifications, launch apps and surface the information that’s relevant to you really quickly.

2.     Full email support. From Exchange Server, to Hotmail, Gmail, Yahoo Mail to a humble local ISP mail account, they’re all fully integrated into the Nokia Lumia and offer the best email experience on a mobile phone.

3.     Social from the start. Plug in your social networking details to have status updates, picture uploads and friends’ details right across the built-in apps on the phone.

5.     Nokia entertainment services. Also free: turn your phone into a book with Nokia Reading or stream millions of music tracks from Nokia Mix Radio – which even works offline.

6.     Gorgeous design. The Lumia 610 is a fine looking piece of kit, available in four different colours, and with traditional Nokia build quality.

7.     Good camera – this is a 5-megapixel, autofocus camera, with a large f2.2 aperture and an LED flash for superior performance in lower light. Turn your photos into works of art with the Nokia-exclusive Creative Studio software.

8.     Office connectivity. Getting work done on a Lumia goes way beyond email. Read, write and edit documents, spreadsheets and presentations with the Office suite and use SharePoint or SkyDrive for sharing and storage. And if you run a small to mid-sized business, Office 365 gives you secure email and everything you’ll need to that run that business.

9.     More than 80,000 apps from the Windows Phone Marketplace to expand and adapt your Nokia Lumia in almost every direction.

10. What’s the catch? If we’re selling this phone for around a third of the price of Nokia Lumia 900, then there must be something missing, right? 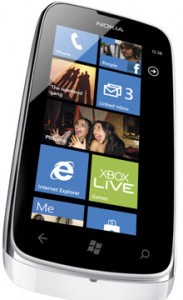 The main functional difference is the amount of RAM. (RAM is the ‘working memory’ of the phone, as opposed to the ‘storage memory’ where it keeps your documents, pictures, music and apps). The Nokia Lumia 610 comes with 256MB of RAM rather than the 512MB found on the rest of the family.

What’s the impact of that? Well, when it comes to the regular operation of the phone and all the features we’ve mentioned, none whatsoever.

It’s fast and functional, just like the other Lumias in the family. But more affordable.

However, the lower RAM means that some third-party apps can’t be used. These are a tiny minority – less than five per cent of the contents of the Marketplace. They include the beta version of Skype available for other phones and a number of the most memory-hungry games, including Angry Birds.

That’s about it. Your choice depends on your needs and your budget, as always.

If having Angry Birds and Skype is a make-or-break factor in your phone choice, then the Lumia 610 isn’t for you. The next most affordable model is the Nokia Lumia 710, which has the regular 512MB of RAM.

Otherwise, if you want a great, good-looking smartphone with a whole host of unique, valuable features, the Nokia Lumia 610 is a steal for the price.

There you have it folks, Nokia settling the big discussion about the Lumia 610 Windows Phone. It is great, it is a budget device, if you need more then look at the Lumia 710 and go on from there.