As if you didn’t have enough reasons to crave the new Nokia Lumia 900 Windows Phone! 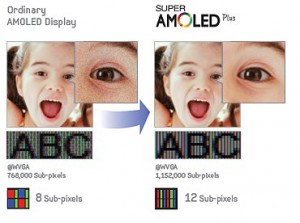 Now, lets pretend you didn’t know what a PenTile display was, we got you covered. When a device has a PenTile display onboard there are big differences in technology, even some differences which will be noticed by the end user. A PenTile display does offer RGB technology, but in another form as RGBG which means each pixel on the display shares a green sub-pixel with the next display pixel. In a nutshell, you are not getting a Full RGB experience and you will notice, not only the pixels more easily, but a blurry effect along the edges of images on contrasting backgrounds. In a Full RGB display there are also 12 sub-pixels, whereas in a PenTile display you only find 8 sub-pixels, hence it is not a full RGB display.

The PenTile display technology shares green sub pixels with other RGB pixels, so you get one-third fewer sub-pixels in total due to the new arrangement. In fact, a 4.3″ screen would have the same resolution as a 4″ display using PenTile technology! In a full RGB panel, each pixel is made up with 12 sub pixels, whereas in a PenTile display, only 8 sub pixels are present. The effects a PenTile display produces are often noticeable by the end user: some colors look grainy and fuzzy, and whites have an odd tone to them. In summary, PenTile displays aren’t as sharp and accurate as a full RGB matrix display: they are cheaper versions of the real thing.