T-Mobile and Nokia have sent out invites for a Windows Phone event on December 14th. It certainly appears to us that T-Mobile, the fourth largest US carrier, will be the first to carry the much hyped entry of Nokia into the Windows Phone market. Speculation on what devices might be on tap for the 14th include the Lumia 710, Lumia 800 or possibly an entirely new phone. This launch comes at a time when Verizon is prompting Microsoft to get on board with LTE. 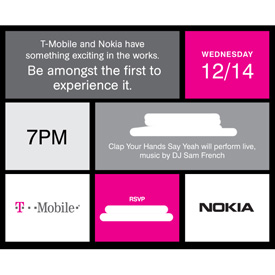 While it’s exciting to see Nokia Windows Phones make it stateside, we’re a little surprised that it’s T-Mobile. Not to mention, with CES on the horizon, the timing is odd to say the least.