Good news a plenty when it comes to Mango. Yesterday, we received confirmation that it had been released to manufacturing, a critical milestone. Today Microsoft has released Windows Phone SDK 7.1 “Beta 2 Refresh”, available from the Mango Connect site. The tools represent a month of improvements. The good news doesn’t end there.

Starting with Mango, Microsoft intends to release one major OS revision each year

For those of you running Mango on your Windows Phone, the company has pushed an OS update to the Microsoft Update servers. In the coming days, you should receive a message indicating that an OTA update is available. The Mango update is build 7712. This is not the RTM build. 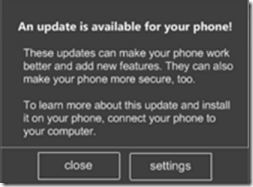 The process to update your phone with build 7712 is pretty straight-forward:

Developers will want to visit the Windows Phone Blog for specifics on the various updates.
Windows Team Blog