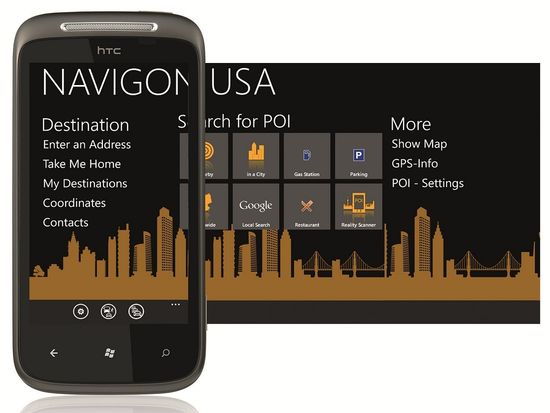 If you’ve been looking for a good WP7 GPS that actually allows offline mapping (which your data plan will thank you for) then jump in joy, because Navigon GPS is set to launch later this year. While German T-Mobile users have been playing with a version of this software for quite some time, Navigon has been holding off on an international release for reasons we don’t fully understand.

The app will launch “later this year” on Windows Phone 7.5. If you needed another reason to be excited about Mango, how about all the awesome apps that are lined up for it?

Here’s a little bit of a description from the press release:

“NAVIGON’s premium navigation app soon will be available for Windows Phone 7 users. The app includes many signature features that have made NAVIGON’s apps successful on Android devices and the iPhone, including on-board maps, spoken turn-by-turn directions, visual lane guidance, live traffic information and rerouting, among many other features. NAVIGON’s new app runs on Windows Phone 7.5 and also takes advantage of new features made available to developers with this new release. These features include the augmented reality function Reality Scanner, which provides an instant and effortless way of identifying nearby destinations while on foot; an option to select address information directly from the phone’s contact list; and the ability to save a favorite or home address as a shortcut on the start screen.”