It’s with a tad bit of sadness that we report this news about Motorola. For those of you who don’t know the history of everythingWM, we started back in 2006 as EverythingQ. Our site quickly became the number one community for Motorola Q owners. With Motorola moving to Android, we too migrated to everythingWM, allowing us to expand our coverage to include all Windows Phone devices. We’ve got a soft spot for Motorola and our hopes were to see the company get back to manufacturing phones, now that Microsoft has released Windows Phone 7. According to Christy Wyatt of Motorola, that time isn’t coming soon, if ever. 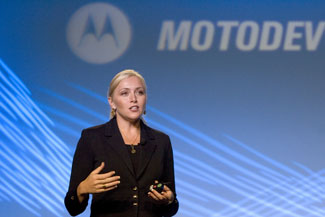 “I don’t envision us using Microsoft. I would never say never but it’s not something we’re entertaining now,” said Wyatt. The company proudly boasts of being 100% committed to Android and believes that Microsoft’s “closed” OS prevents them from “creating unique value”.

Wyatt believes that Motorola could only offer “commoditized hardware” if they were to manufacture phones running Windows Phone 7.

Motorola makes excellent hardware. It’s a shame they wouldn’t want to compete on hardware alone and add some diversity in their product portfolio.