Motorola today announced their new line of phones including the Z8, RAZR2 and the release of the Moto Q 9 in Italy. In addition to dropping the ‘h’ from the Moto Q 9 name, Motorola also renamed the GSM Moto Q to the Moto Q 8.

The Moto Q 9 will be available next week in Italy through Vodafone. The Moto Q 9 showed up Vodafone’s Italy site in early May. Motorola is expected to launch in other parts of the world throughout the coming months, but has yet to confirm a US release date. Motorola has also dropped the ‘h’ tag from the Q 9, which was presumably there to indicate support for HSDPA. Both the Moto Q 9 and Moto Q 8 are GSM based technology with the Q 9 support the faster HSDAP and the Moto Q 8 supporting EDGE. Motorola had previously stated the Moto Q 8 would not be marketed in the US, but left the door open for a possible US release. 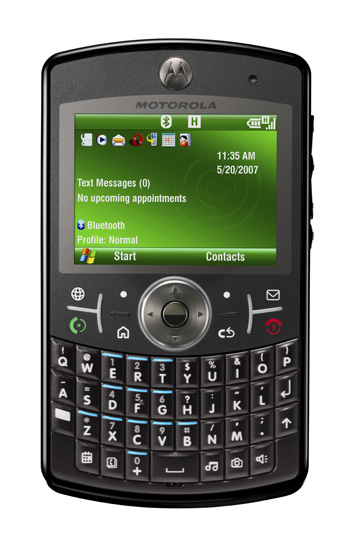