Motorola executive Ron Garriques told analysts at an investment conference that he expects Motorola to sell 750,000 MotoQ smartphones in the first 90 days and 3 million in the first nine months. 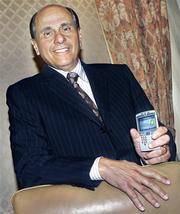 Motorola Inc. expects its new Moto Q smartphone and e-mail device – a competitor to the BlackBerry and Treo – to enjoy sales similar to those of its popular Razr, the head of its mobile phone division said Wednesday.

Ron Garriques told analysts at an investment conference that the company has high expectations for next week’s U.S. release of Moto Q through Verizon Wireless, followed soon after by its launch in Latin America, China, Korea and elsewhere.

Motorola estimates 750,000 sales of the Q in the first 90 days, 1.5 million in the succeeding 90 days and 3 million the three months after that. Those are the same numbers racked up by the Razr, the ultra-thin phone whose enduring success has helped the Schaumburg, Ill.-based company pick up market share on industry leader Nokia Corp. since 2004.

“We think we’ll follow the exact same curve as Razr did,” Garriques said at the conference in San Francisco, which was Webcast.

That is an ambitious projection for the QWERTY handheld device. Motorola now projects at least 300 million total sales of Razrs and their related spinoff phones over the lifetime of the product family, Garriques said.

He said he was unaware of any inventory problems for the company worldwide at the moment.

Garriques said Motorola will extend its momentum through next year at least.

“We will gain share every single quarter in 2007,” he told the analysts.

He also said the company is talking to customers about a new line of super-thin cell phones it plans for next year called the SCPL (“scalpel”), although he did not give specifics.

The Moto Q will be available through Verizon Wireless starting May 31 for $200 when purchased with a two-year commitment to a Verizon plan. Besides e-mail and Windows Mobile software, its features include voice-activated dialing, smart contacts dialing, speakerphone and Bluetooth capabilities.