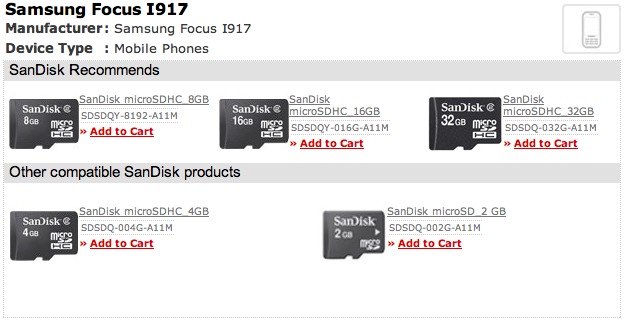 If you’re still trying to track down a MicroSD card for you WP7 phone that won’t be completely useless, we’re starting to get a clearer picture of which ones are okay, and which ones aren’t. From SanDisk, we have cards running from 2GB-32GB, approved for use in the Samsung Focus, with prices ranging from $16-$200.

Kingston has a similar array of cards approved for the Focus, and they’re substantially cheaper than the SanDisk versions.

Keep in mind that putting a card into a WP7 handset will render it unusable for other devices — including formatting. So far the only workaround we’ve heard of is using a Symbian smartphone, of all things.