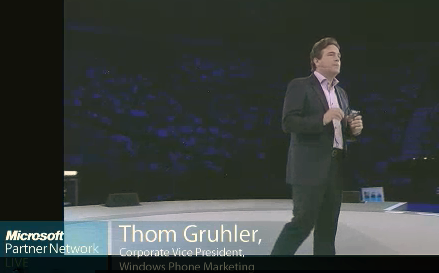 At Microsoft’s Worldwide Partner Conference, there was a large Windows Phone presence, without a doubt, but some would say otherwise as far as the real world goes. Microsoft took the stage at WPC and declared that they realize there is a Windows Phone awareness problem, and they will address that issue with Windows Phone 8 later this year.

Some instances of lack of awareness with Windows Phone out in the world include the fact that even the word “Lumia” has trended higher than “Windows Phone” on Google searches. That is not how things should pan out for the Windows Phone.

Thom Gruhler, Microsoft’s VP of Windows Phone Marketing, took the weight upon his shoulders and spoke about the issues at WPC 2012.

Gruhler, who now has such a high position at Microsoft, is actually the same mastermind that came up with the well-known Verizon “Can you hear me now?” campaign. See, for example, even the Verizon campaign just mentioned is a statement familiar with everyone around the world. You can find the statement in jokes, conversations, etc. This is an effect that Microsoft needs to produce with the Windows Phone.

With the help of Gruhler on board, as the VP of Windows Phone Marketing, we are confident he will come up with something real good for Windows Phone 8. Most likely the first Windows Phone 8 commercials to debut later this year will contain the magic synonymous with Gruhler’s previous efforts.