Announced today, Microsoft will be investing $300 million into a new partnership with Barnes and Noble. The two will form a new subsidiary of Barnes and Noble, that will include all of the Nook business along with the educational college business. The current Nook runs Android and has in itself become a bit of an underground fan favorite among hackers who have found it relatively easy to root enable for a low-cost Android tablet. 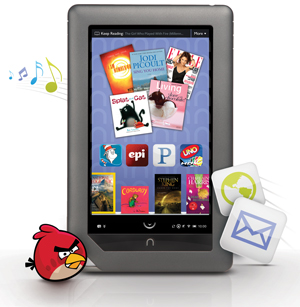 Microsoft’s stake in the new venture is 17.6 percent, so B&N will still own the bulk of the partnership. With Windows 8 almost upon us, the two will work on bringing a Nook application to the new platform. Amazon’s Kindle Fire is the leading Android tablet in the market and Apple’s iOS has iBooks. Microsoft will now have their own eBook platform to integrate with their assorted mobile and desktop platforms.

New York, NY and Redmond, WA (April 30, 2012) – Barnes & Noble Inc. (NYSE: BKS) and Microsoft (NASDAQ: MSFT) today announced the formation of a strategic partnership in a new Barnes & Noble subsidiary, which will build upon the history of strong innovation in digital reading technologies from both companies. The partnership will accelerate the transition to e-reading, which is revolutionizing the way people consume, create, share and enjoy digital content.

The new subsidiary, referred to in this release as Newco, will bring together the digital and College businesses of Barnes & Noble. Microsoft will make a $300 million investment in Newco at a post-money valuation of $1.7 billion in exchange for an approximately 17.6% equity stake. Barnes & Noble will own approximately 82.4% of the new subsidiary, which will have an ongoing relationship with the company’s retail stores. Barnes & Noble has not yet decided on the name of Newco.

One of the first benefits for customers will be a NOOK application for Windows 8, which will extend the reach of Barnes & Noble’s digital bookstore by providing one of the world’s largest digital catalogues of e-Books, magazines and newspapers to hundreds of millions of Windows customers in the U.S. and internationally.

The inclusion of Barnes & Noble’s College business is an important component of Newco’s strategic vision. Through the newly formed Newco, Barnes & Noble’s industry leading NOOK Study software will provide students and educators the preeminent technology platform for the distribution and management of digital education materials in the market.

“The formation of Newco and our relationship with Microsoft are important parts of our strategy to capitalize on the rapid growth of the NOOK business, and to solidify our position as a leader in the exploding market for digital content in the consumer and education segments,” said William Lynch, CEO of Barnes & Noble. “Microsoft’s investment in Newco, and our exciting collaboration to bring world-class digital reading technologies and content to the Windows platform and its hundreds of millions of users, will allow us to significantly expand the business.”

“The shift to digital is putting the world’s libraries and newsstands in the palm of every person’s hand, and is the beginning of a journey that will impact how people read, interact with, and enjoy new forms of content,” said Andy Lees, President at Microsoft. “Our complementary assets will accelerate e-reading innovation across a broad range of Windows devices, enabling people to not just read stories, but to be part of them. We’re at the cusp of a revolution in reading.”

Barnes & Noble and Microsoft have settled their patent litigation, and moving forward, Barnes & Noble and Newco will have a royalty-bearing license under Microsoft’s patents for its NOOK eReader and Tablet products. This paves the way for both companies to collaborate and reach a broader set of customers.

Additional information will be contained in a Current Report on Form 8-K to be filed by Barnes & Noble.

Barnes & Noble and Microsoft will host an investor call and webcast beginning at 8:30 A.M. ET on Monday, April 30, 2012. To join the webcast, please visit: www.barnesandnobleinc.com/webcasts.