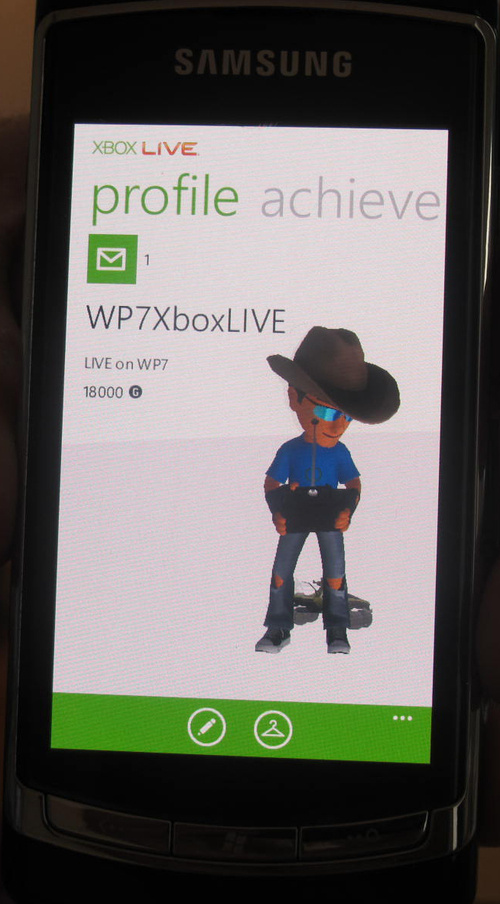 At the GamesCom 2010 conference in Cologne, Germany, Microsoft demoed XBox Live for WP7, and announced more than sixty games, a selection that the company has called “just a taste”. There are some big names on board, including a number of high-selling apps that have previously done well on the iPhone. Expect to see Guitar Hero, Flight Control, Asphalt 5, Assassin’s Creed, Earthworm Jim, GeoDefense, Puzzle Quest, Splinter Cell, and a whole bunch more.

Just like Xbox Live Arcade, each XBox Live WP7 game will have a grand total of 200 gamescore tied to achievements, bolstering the account that you share between both XBox and WP7 device.

First wave of Xbox LIVE titles from award-winning publishers announced for the launch of
Windows Phone 7.

COLOGNE, Germany – Aug. 17, 2010 – Today at gamescom 2010, the world’s
largest consumer-oriented games showcase, Microsoft Corp. premiered the first wave of
Xbox LIVE games launching on Windows Phone 7 this holiday. With even more games and
applications to come, Windows Phone 7 is putting the power of Xbox LIVE into the palm of
your hand – from Xbox LIVE Avatars to staying connected with friends, Xbox LIVE is now at
your fingertips, anytime, anywhere.*

The Games You Want, Played When and Wherever You Want Them

In a sea of games, apps, gadgets and gizmos, the biggest obstacle can be finding the
game that’s right for you. Only Windows Phone 7 has a Games hub featuring Xbox LIVE,
creating a different kind of mobile gaming experience that puts the games you want front and
center. Xbox LIVE games on Windows Phone 7 will be specially selected from the top names in
mobile, PC and console game development, making the best mobile games even better, thanks to
Xbox LIVE. With try-before-you-buy demos, Xbox LIVE leaderboards, turn-based multiplayer,
Achievements and more, Windows Phone 7 brings the quality, consistency and community of
the Xbox experience to gamers on the go.

Windows Phone 7 also will be supported by content from Microsoft Game Studios
(MGS), providing strong first-party gaming titles and intellectual property for the phone. For
Xbox fans, this means that Windows Phone 7 will offer companion titles to familiar names, such
as “Halo: Waypoint,” and “Crackdown 2,” extending the experience of their favorite Xbox 360
franchises.

“Windows Phone 7 is the launch of a major gaming platform for Microsoft,” said Matt
Booty, general manager of mobile gaming for MGS. “Just like we’ve done with Xbox 360, our
charter is to push the envelope and deliver definitive games that maximize the platform. We will
have an incredible lineup of MGS titles, and that’s just the beginning.”

The most creative minds in game development are bringing the biggest franchises to
Windows Phone 7. The first wave of launch portfolio titles includes Xbox LIVE games from
the likes of Gameloft, Konami, Namco Bandai, PopCap and THQ. Whether you choose to play
a gem of a puzzler with “Bejeweled™ LIVE” (PopCap), bring down the house with “Guitar
Hero 5″ (Glu Mobile), fight off a destructive alien invasion in “The Harvest” (MGS), paint
your way out of a corner with “Max and the Magic Marker” (PressPlay) or defend your city
in “Crackdown 2: Project Sunburst” (MGS), the first wave of games announced in the launch
portfolio of Xbox LIVE games on Windows Phone 7 has something for every mobile gamer:

“Max and the Magic Marker” (PressPlay)

Xbox LIVE on Windows Phone 7 unlocks a world of games and fun and directly
connects you to a global community of more than 25 million active Xbox LIVE members.
Windows Phone 7 is the only phone that seamlessly integrates Xbox LIVE and provides unique
mobile gaming experiences:

Avatars. Connect to your Xbox LIVE profile and Avatar, or create a new one if you don’t already have an Avatar or Xbox LIVE profile; take your 3-D Avatar and props with you on the phone with full closet access.

Friends. Bring your Xbox LIVE friends with you everywhere; compare Achievements, challenge rivals to your favorite game, and even see who’s online and what they’re doing on their consoles, PCs or phones.

Game access. Easily view and launch your full game library from a single location; find, try and buy new games either in the Marketplace or Games hub.

Messaging. Communicate with all of your Xbox LIVE friends, any time you want, through Xbox LIVE messages.

Multiplayer. Invite, connect and play against friends on other Windows Phone 7 phones or the PC with turn-based (asynchronous) multiplayer gaming.

Additional titles in the launch portfolio will be released between now and the Windows Phone 7 launch this holiday season; once the phone launches, new Xbox LIVE titles also will be added to the games portfolio every week.