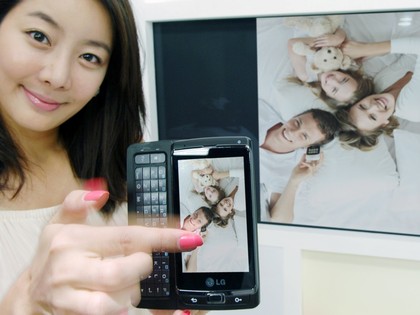 This isn’t quite a product announcement, but LG was showing off the Optimus 7/E900 at the IFA trade show in Berlin. The big feature that LG is touting for their first entry into the world of Windows Phone 7 is DLNA. This feature will allow easy sharing of media between compatible devices, like a phone and television. All you have to do is flick the media from your phone to the target device, be it a screen, or home audio system.

LG obviously isn’t attempting to keep the Optimus 7 quiet, and with them showing it off all over Europe, I hope we’ll see an official announcement soon.

Sep. 6th, 2010 — LG Electronics (LG) is showcasing a major breakthrough in mobile and home convergence at this year’s IFA trade show in Berlin. The new technology makes it possible to share multimedia files on LG’s upcoming LG Optimus 7 and all DLNA compliant digital devices at the touch of a finger.
LG’s unique multimedia sharing technology on LG Optimus 7 allows users to enjoy content on the phone across today’s digital platforms with a simple finger flick. This preinstalled feature allows users to send files directly from the phone’s media galleries, without having to leave for another application. The phone will automatically display compatible devices in the same Wi-Fi zone and let users literally flick media files to the targeted device. Users can transfer multimedia saved on their phones — 720p HD videos, high-resolution photos and high-quality music files — wirelessly to their TV or home theater system.
“This unique feature is a direct response to the growing need for technologies that empower users to share multimedia content across electronic devices,” said Mr. Seong-jin Park, Vice President of Mobile Handset R&D Center at LG Electronics Inc. “LG Optimus 7 smartphones will be at the center of a complete entertainment experience, representing LG’s leadership in mobile convergence.”
This unique media file-sharing technology will be embedded in upcoming LG Optimus 7 smartphones, which go on sale early in the fourth quarter of this year. With more than 240 leading consumer electronics brands adopting the media sharing technology, DLNA is expected to set a new industry standard for home entertainment.
LG is demonstrating this DLNA-based multimedia sharing feature at the LG booth at IFA in Berlin, Germany from September 3-7, 2010.