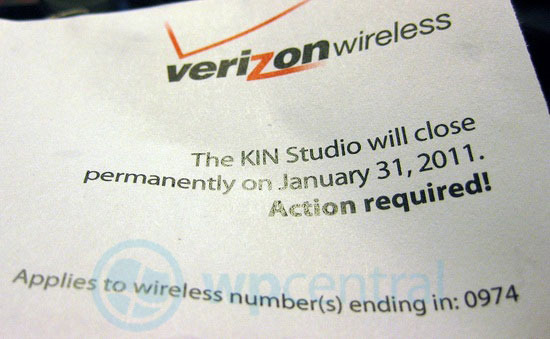 The one killer feature the ill-fated Kin phones really had going for them was Kin Studio, which allowed you to tap into the cloud for news, social networking, live updates and the like. Unfortunately, come January 31st, that service is dying, reducing the phones to dumbphone level. You can still call, email, SMS, steam music via Zune Pass and browse the web, but all the cool social, cloud-based stuff will be dead. Here’s a list of what’s dying:

Verizon is appearing contrite over the death of the Kin and is offering users a free new phone for their troubles. Any Kin user can swing by Verizon before March 31, and pick any 3G phone of their choice for free. By then, Verizon should be stocking a bunch of WP7 handsets, too.