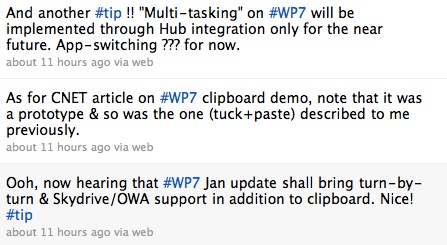 Twittered MS_nerd has posted a handful of rumors about the upcoming January update to WP7. If his sources are correct, then we’ll see not only the already confirmed copy-paste functionality, but also turn-by-turn GPS navigation, Skydrive, and app-switching based multitasking.

If true, this means the January update will bring a huge number of new features, which will really help to legitimize WP7. Of course, that’s a lot of assumptions to make based on random tweets from some dude on Twitter.