Eric Hautala over at Windows Phone Blog, posted another update status on devices that are still on hold for the February and/or March updates for Windows Phone 7. Specifically, Microsoft is now scheduling updates for HTC Surround on AT&T, Deutsche Telekom and Optus customers. What this means is carriers mentioned have now finished 'testing' the respective update, and … END_OF_DOCUMENT_TOKEN_TO_BE_REPLACED

The long awaited first Windows Phone 7 device for Verizon has shown up on BestBuy.com. The phone is listed at a price of $599.99, which is a pretty steep price but most likely not official. Best Buy usually lists items that haven't been officially announced yet at a ridiculously high price for the sake of protecting accidental sales. In other sources, Engadget received … END_OF_DOCUMENT_TOKEN_TO_BE_REPLACED

In an exclusive internal email posted over at WinRumors, AT&T has finally set a date for the NoDo update release. The release  is (finally!) set for April 19, upon which NoDo will be available all at once for LG Quantum and Samsung Focus devices. It seems HTC Surround users won't be so fortunate, as AT&T states that NoDo release won't happen until mid-May release. There … END_OF_DOCUMENT_TOKEN_TO_BE_REPLACED 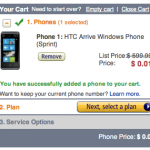 If you've had your eye on the HTC Arrive and don't mind a 2-year agreement with Sprint, you can purchase it from Amazon Wireless for $0.01. Those upgrading an existing account can purchase the Arrive for $149.99. … END_OF_DOCUMENT_TOKEN_TO_BE_REPLACED 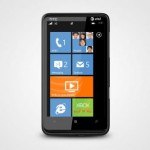 AT&T has just announced that they'll be selling the HTC HD7S, which appears to be the same as the already available T-Mobile HTC HD7, just with a bit more S I suppose. It's the same 4.3-inch screen, 1GHz processor, 5MP camera, and whatnot — and it'll have copy and paste. It really is just the HD7 but on a different network — which is to say the same network now that … END_OF_DOCUMENT_TOKEN_TO_BE_REPLACED