Home > Apps > Get Your Coupon On With SlickDeals For WP7 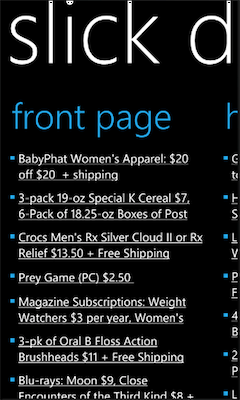 SlickDeals is arguably the best deals site on the internet, and every day dozens of major deals get posted on their frontpage, and hundreds hit the forums. If you’re on the hunt for a great deal on just about anything, it’s generally the first stop on your search. SlickDeals has now busted into the world of WP7, with a rather slick (ha!) new app that takes plentiful advantage of the Metro UI:

Save money here by finding the lowest and cheapest price, best deals and bargains, and hot coupons. We’re all about community driven bargain hunting with thousands of free discounts, promo codes, reviews and price comparisons.