Next month, it will be a year since Steve Ballmer stood in front of a table of new Windows Phone 7 devices. Phones from HTC, Samsung, LG and Dell were all accounted for and would be released in the months to follow. To this day, you’d be hardpressed to pick a winner from that group, although most would likely say it’s the Samsung Focus. Campaigns for that phone were minimal and poor at best.

For their part, Microsoft was fair in their presentation of the handsets, almost to a fault. The result was a group of phones, all with similar specs, that got lost in the shuffle. There was no standout, which can make things difficult for consumers. If Windows Phone enthusiasts debate the “best” Windows Phone, then how is a consumer expected to know which is the clear winner. While having standardization of specs is advantageous to consumers, it also makes it tougher to differentiate models. 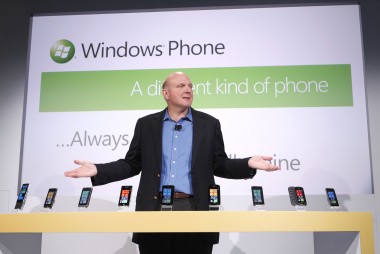 Branding matters and it can help sell phones. It’s still very early, but is this year shaping up to be a repeat of last? Mango brings Windows Phone to forefront again this fall, but Microsoft is again relying on the marketing savvy of manufacturers and wireless carriers to make Windows Phone a success. A great product alone is sometimes not enough.

With Apple, you have one choice if you want the latest and greatest. Right now, that’s an iPhone 4 and next month it will be the iPhone 5. The iPhone 5 will benefit from massive campaigns from Apple, Verizon, AT&T and possibly even Sprint. If you look at the Android landscape, there is a new phone almost daily. There is a great level of differentiation based on specs, features and even the version of OS. Just yesterday, AT&T announced the Infuse 4G (not to be confused with the Inspire 4G) running Froyo, when Gingerbread has been out for quite some time. With all the various devices, it’s no walk in the park to select a new Android phone. Marketing matters and it’s apparent with Verizon’s successful Droid campaign, which includes phones from a variety of manufacturers.

For Microsoft to acheive similar success, they might need a similar marketing success story and might be dependant upon the wireless carriers to make that happen. Microsoft’s ‘Glance and Go’ campaign was great, but they cannot be responsible for picking winners. The brief clip of the Focus at the end doesn’t count. Compare that to the Droid Bionic commercial and which one is more captivating? You cannot pick a favorite child, it doesn’t work that way. You could put all of the various Android phones on a table similar to the one Ballmer stood over in 2010 and have the same issue. How does a consumer pick a winner? The exact same way they do it with Android phones. Successful marketing.

If you look at the field of competition this fall, you’ve got iPhone and Android. There are various big devices coming this fall from Android device manufacturers. You can expect marketing dollars to get behind Droid and Nexus brands. On the Windows Phone front, HTC has already introduced the HTC Radar and HTC Titan. It’s not clear if these will or will not carry the same branding when they hit the shelves of wireless carriers in the US. We’re waiting on Samsung and LG to provide announcements related to their upcoming devices. If at the end of this, the result is a table filled with non-descript phones, it could be a repeat of 2010/2011. Somewhere along the line, the carriers need to pick a winner and get behind it. HTC, Samsung and LG all play both sides, but will they allocate the marketing dollars to Windows Phone? How about the carriers? Can Microsoft give them a nudge? For all it’s faults, the KIN had more brand recognition then the current crop of Windows Phones. Things need to change. Otherwise, consumers will find themselves shopping Droid Bionic, Nexus Prime, iPhone and those other phones running Windows Phone Mango. That’s not how you win.