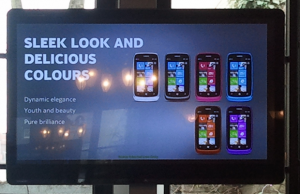 During the Nokia Blogger Meet 2012 at Düsseldorf, a film shown revealed two new colors, purple and orange, for the Nokia Lumia 610 Windows Phone. The event reconfirmed a May 2012 Germany release date, but no information was given on the appearance of these two additional colors.

The lack of information also left everyone wondering whether the colors will be available at launch among the traditional white, black, cyan, and magenta color options, or if purple and orange will be available later on. We will see if these colors pop up in Germany as May 2012 approaches.