At first, the CNN application, ESPN Hub and up to 20 games from EA Games were expected to be exclusive to Nokia devices for up to 18 months. As more news is being revealed with each respective application/game the ‘limited time’ doesn’t come anywhere close to an 18 month period. The CNN application, as officially announced by CNN, will be available Nokia exclusive only for 90 days and will then populate to all other Windows Phones. A 90 day ‘exclusive’ seems reasonable enough as it will most likely pull in those eager enough to get a Nokia device, whether or not they are on contract, and only make all other users wait three months for a great application. 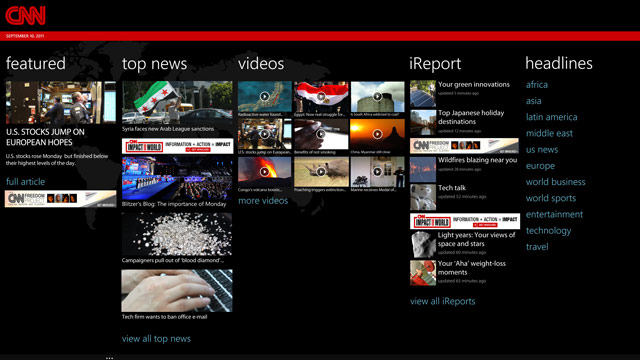 The CNN App for Windows Phones will provide the latest news and video from CNN’s reporting around the globe. Offering a robust user experience, the CNN App takes full advantage of Windows Phone 7 features to offer a vivid, panoramic interface, the ability to pin sections of the app to a home screen, Live Tile for real-time news updates, and direct access to iReport, CNN’s participatory news community. For the first time on an app, users will have the ability to submit an iReport while simultaneously capturing the event. Launching globally for free in the next month, the CNN App will be exclusive to Nokia users for 90 days and then available on all Windows Phone devices as they come to market.

“The CNN App will offer Windows Phone users a customizable CNN experience shaped for their environment,” said Louis Gump, vice president of CNN Mobile. “The Windows platform and Nokia phones will enable millions of people to plug in using the CNN app and interact with the world – where, when and how they want.”