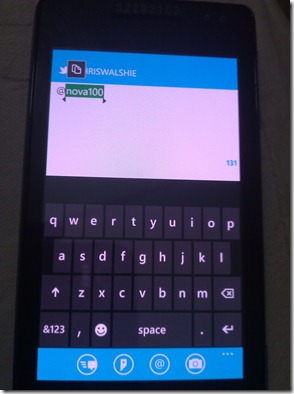 Chris Walsh, one of the guys behind ChevronWP7, has been chatting to the WP7 team for a couple of days now, and has put up a blog post about the new features expected in the update to Windows Phone 7. Assumedly Windows Phone 7.1, codenamed NoDo, will definitely bring copy and paste as well as speed improvements to the platform. Walsh points out that one of the limitations of copy and paste is where it can be used:

The biggest [caveat] being, copy and paste is ONLY supported on the textbox control in 3rd party apps.  When I say supported, I’m talking about the OS automagically recognising the input control and giving the user the fancy text selection picker with a “copy” button.

One issue I have noticed though is certain apps don’t actually use the textbox to render read-only text.  For example, the Twitter for Windows Phone app, when you’ve clicked on a tweet to either view it or click on a link, the text isn”t rendered in a TextBox control.  Unfortunately you’re not going to get copy & paste there. The simple fix is to change to a textbox control for scenarios where a user might need to copy some text into the clipboard but it requires some effort from application developers.

He also talks about the significant speed boost for launching apps, and the death of Chevron.