We had heard that NoDo will make it’s way to the LG Quantum and Samsung Focus on April 19th and thankfully that has become a reality. Yes folks, the first software update is upon us. Fire up your Zune software (or Windows Phone Connector for Mac users) to install the update. 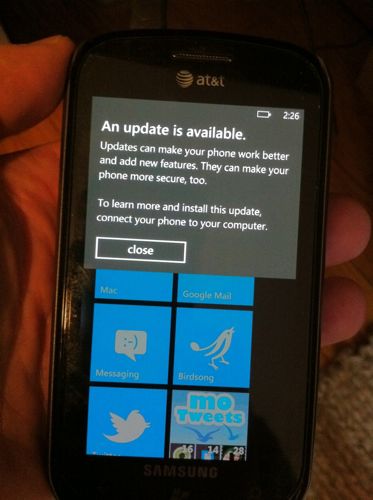 The update offers a host improvements. Most notable being support for copy and paste. The Marketplace experience has also been refined. Prior to NoDo, searching in a particular category would bring results from music, apps, etc. If you search within apps, the results will be apps only. There are also some minor speed improvements. AT&T phones also receive WISPr protocol support, allowing your phone to auto switch to AT&T’s WiFi hotspots when available. Also included is support for the AT&T Address Book.

Share your update experiences in our Windows Phone 7 forum.