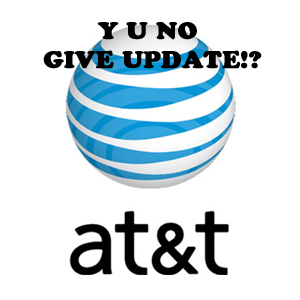 According to a post by jamileh over on the AT&T forums, AT&T hasn’t pushed any Windows Phone updates since Mango for a reason. That reason is the fact that apparently AT&T is working on a bigger update which will include the important 8107 update and more. Here post reads the following:

Hey all – I know you’re eagerly awaiting news about this.

AT&T plans for a Windows Phone update that will contain the improvements in the 8107 update and more.

I will likely start a new thread as I get more information as this one is getting a bit tricky to find information in.

Word around the net is that AT&T isn’t fooling anyone, by the “8107 update and more” they mean they will simply roll all updates after Mango with the Tango update once it comes around. It seems AT&T has the idea that they can play lazy with the updates that don’t have official names. Jamileh has yet to provide anymore information on the much needed updates currently available, but not yet pushed to AT&T users.

Currently, users like myself desperately need the 8107 update on AT&T, as it fixes such major issues as the disappearing keyboard and SMS vulnerability. Come on AT&T, just make everyone happy already and stop holding things back!