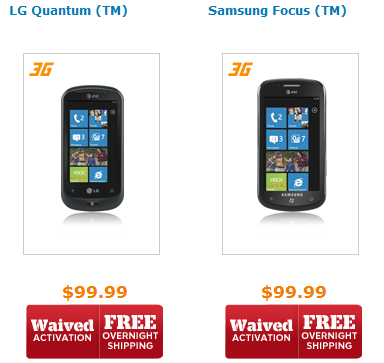 The constant markdown of Windows Phone 7 phones continues even after the holiday buying season. AT&T has knocked down the prices of the LG Quantum and Samsung Focus, and now they’ll just set you back $99.99. Early reports indicated that AT&T is also offering free overnight shipping and activation, but that may have evaporated now.

The question on everyone’s mind is “why are these phones so damned cheap?” Between this, the BOGO deals, and the occasional $0.01 price on Amazon, they’re going for next to nothing. Is it a major move to get people onto the platform? Indicator of overall poor sales? Or are they clearing stock for some big CES announcements?

At this juncture, it’s hard to say, but I’d definitely recommend waiting until after CES just in case something absolutely amazing gets announced.