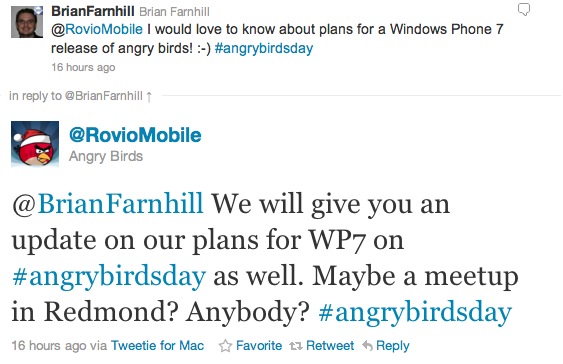 This tweet from Angry Birds developer Rovio has everyone wondering if we might finally see the incredibly popular game on Microsoft’s mobile OS. Rovio has announced Angry Birds Day for December 11, when they’ll announce all sorts of information about the app, including (potentially) their plans for WP7. They’re organizing giant meetups and everything.

We’ve been hoping for the incredibly popular game to hit WP7, ever since Microsoft used the app’s icon on their website without permission. Even though that even soured relations slightly, we’ve been crossing our fingers for the app to hit WP7, and now it finally looks like it will.