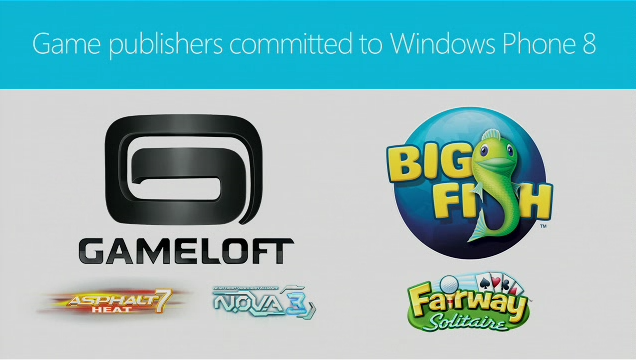 During all the great announcements and features revealed at the Windows Phone Developer Summit, Microsoft also celebrated some marketplace milestones.

To celebrate the 100,000+ applications milestone, Microsoft took the opportunity to announce some great applications coming soon to the Windows Phone marketplace:

To mark the milestone, today we’re announcing a new batch of marquee titles. The official Audible app for audiobooks arrives in Marketplace today. Official apps from Chase and PayPal are in the works. Gameloft has Windows Phone versions of Asphalt 7: Heat and N.O.V.A. 3 Near Orbit Vanguard Alliance on the way.

And Nokia is helping deliver the much-requested Zynga games Words with Friends and Draw Something to Windows Phone later this year.

So, that makes three official applications announced: Audible, Chase, and PayPal. As far as games, some great titles will also soon be available on the Windows Phone: Asphalt 7: Heat, N.O.V.A. 3 Near Orbit Vanguard Alliance, Fairway Solitaire, Words with Friends, and Draw Something.

With Windows Phone 8 releasing in the fall of this year, and all these great applications and games so far announced, it’s going to be a great year for Windows Phone!